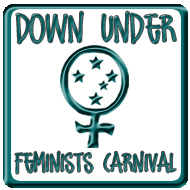 Welcome to the 47th Down Under Feminists Carnival. [Insert usual claims of it being very hard to restrict to only 2 posts each] Please do go look at other posts on these blogs, some seriously good stuff is missing for the sake of preventing unwieldyness. Thanks to the contributors, I've had a fantastic time reading all the submissions.

Also, I haven't been reading nearly as many blogs as I'd like lately, so I'm not familiar with some of these people. Please let me know if I've failed to highlight any new bloggers.

Confessions of a Stuffed Olive - Where are the English texts about girls?
Pointing out that encouraging boys to read by choosing only texts with boys in them doesn't help anyone.

Gill Polack - Women's History Month: Anita Heiss
Anita writes about the women who helped her become who she is.

Australian Women Writers - "In defence of books written by women for women"
Why is romance, as a genre, so dismissed and denigrated?

Smile... It confuses people - Fairytales
How to rewrite fairy tales and infuse them with some feminist values.

Zero at the Bone - Loss of Weight or Fellow Feeling
Highlighting the hypocrisy in the claim that fat hating is only about health.

Settle Petal - Frustration
How misogyny gets in our heads and makes us hate ourselves and other women.

Fat Heffalump - WE DON’T IMAGINE IT, WE SEE IT
On the impact of a fat hating culture.


Fatandslutty - My Clitoris is Offensive
The war against good sex, and how to avoid it. (The war, that is, not the good sex.) New Blogger!

Lip - submissive sex - anti-feminist or not?
Self-explanatory really, but with an interesting comment thread about how our preferences might be influenced (or not) by prevailing culture.

News With Nipples - But they’re women, they should be nice
Why does anyone ask why women on opposing parties aren't nice to each other when they don't ask the same question of men?

Crikey - Nanny Sends Tracey and Tony to the Naughty Corner
Regarding the exploitation potential of nannies after Tony Abbott's announcement of his plan to subsidise nannies.


blue milk - How to do a homophobic political ad
So many layers of fail.

Opinions @ bluebec.com  - Submission to the Senate on marriage equality
Self explanatory really! :)

Opinions @ bluebec.com - Biphobia
What it is, and how we're probably all guilty of it sometimes.

All My Penguins - queer chinese things!
A round up of queer goings on in China.

All My Penguins - queer australian teevee
Joy in seeing not only queer people on TV, but some of them aren't even white.


Hoyden About Town - Girls speak: on Harry Potter, Radio National, and how to fix a sexist screwup
A radio national presenter gets it wrong, but then gets fixing it really quite wonderfully right.

Blogger on the Cast Iron Balcony - What century are we living in, again, Fairfax?
Regarding the constant mentioning of women's reproductive status in the media. - Trigger warning for rape

The Banana Lounge - Screening diversity
On the overwhelmingly white world of Australian television.

No Place for Sheep - The battle for control of the sexual discourse
Arguing that anti-porn activists are also attempting to dictate what sex should and shouldn't be.

the news with nipples - The conversations women have
Why much of what's in the women's section needs to be read as much, if not more, by men, and marketing to women in general.


Women in the workplace

The Hand Mirror - This isn't what we're paid for
A very difficult day made worse by casual objectification of staff.

the news with nipples - Germain Greer and body-shaming
Recognising that nobody's perfect, but also that when appropriate, we all need to say WTF?


Stargazer - you're angry at the wrong people
Pointing out how people have been fooled into directing their blame down the social hierarchy rather than up.

Stargazer - building morale
A followup post discussing how engage and empower those most in need of societal change.

Penguin Unearthed - Missing girls
Discussing a fascinating paper that examines the missing women in various parts of the world by age.

Fat Heffalump - Bullies - You don't get a cookie for feeling bad
Response to an interview with an ex-bully.

Maybe it means nothing - When will you stop being a feminist?
Some markers of what a post-feminist world might look like.

Choice & Anti-choice
(I can't help being astounded that we still need this heading, but we do - increasingly even!)

Ideologically Impure - On the front lines of the NZ abortion rights struggle
Regarding the Supreme Court battle over Abortion Supervisory Committee.

No More Training Wheels - The Dreaded Future
Considering the future with a disability.

No More Training Wheels - Public Yet Exclusive Transport
Highlights why providing access for people with disability is part of our everyday social obligation, not some special extra effort.


Zero at the Bone - The direction of desire
Why our restricted notions of sexual desire make a mess of everyone.

Spilt Milk - The how of getting through
A beautiful appreciation of the things that get us through tough times.


A Bee of a Certain Age - International Women’s Day on Stuff: All you old hags should wear make-up
More examples of women being made responsible for their own discrimination, and some atrocious advertising.


blue milk - Running on empty
Remembering how hard the first year of a baby's life is.

Hoyden About Town - From the back to the middle and round again
The constant readjustments parenting requires in action. Also, teaching schools that all children are not alike.

Ariane's Little World - Sins of the Father
The only post I managed to write in March, so it's here regardless of merit! Regarding the cycle of bad parenting and how breaking it isn't all down to the individual.

The Hand Mirror - Of children and protests and taking the former to the latter
Apparently taking kids to protests is another thing that only Bad Mothers do. I was sad to have my ignorance on this rectified.

A Bee of a Certain Age - Since when does a guideline become a rigid rule?
On breaking guidelines while parenting.

The Antibogan - Racism exists in Australia – are we doing enough to address it?
Article by Dr Helen Szoke about some racism facts. Some polite but slightly infuriating arguments over academic vs social definitions of racism in the comments.

Miscellaneous
(Or I Can't Work Out Where To Put It)

feminaust - Identity ~ Afghan or Terrier?
Is identity a source of strength or a trap? Chally figured I'd like this, and she was right. :)

The Filing Cabinet - IWD picnic in photos; reflections on community activism
On some of the unintended positive consequences of activism.

fcollective - F FOR FEMINIST: THE F COLLECTIVE
Who the F Collective are and what they're trying to do.

Hoyden About Town - Housing and Dreaming Community
Dreams and thoughts about communal living, which continues into the comment thread.


And because fighting oppression can be rage inducing, please go look at some gorgeous baby bunnies, courtesy of Mim: And to think I used to complain about stuffed toys breeding

Edit: Sorry, in my excitement at having finally got it all together, I rudely forgot to mention who's hosting next! The next edition of the Down Under Feminists Carnival is planned for 5 May, 2012 and will be hosted by brownflotsam at contradictory multitudes.
at 2:54 pm

Email ThisBlogThis!Share to TwitterShare to FacebookShare to Pinterest
Labels: dufc

New comments are not allowed.

Ariane
I don't know what this blog is about, but if you have anything to say about it, go ahead!